Eleven members of the Book Club met with Mrs. Black April first. The house-keepers were interested in a report from the president of a model electrical bakery run by Niagara power, with tables arranged to go & return for service, bearing orders from the guests. Every one wished for one of their own. John Richard Green the English historian described in conversation as “vivid as lightning.” Henceforth the Cubans will join with the Mecklenburgians in a in celebrating twentieth of May Declaration of Independence. [Henceforth] The children of Marion Crawford petition to bear their fathers double name as Tom Marion Crawford, Dick Marion Crawford, etc.- as a tribute to his celebrity-xxx. In spite of vigorous efforts our host had been able to obtain little more than an autograph from the authors personally. We were interested to hear that she was a native of Hampton Falls, New Hampshire

[Page 2] a graduate of Exeter Seminary and for some time had held position on the staff of The Youth’s Companion. She has written a number of books. “Meadow Grass ,” “Kings End” Tiverton Tales. Road to Castaly, and last and longest, Mary Warrener very formally received in Boston. Miss Harrison pleased us with an interpretation of “The May of Peace” and other extracts fromTiverton Tales . Miss Neal gave a flattering opinion of “The Day of his Youth” as a poem in Prose even if the authors hero did lose his life in an effort to save a poodle. Alice Bunn was then introduced by Miss Black. Etc.. 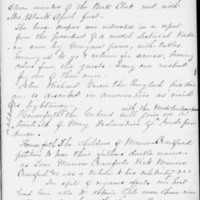 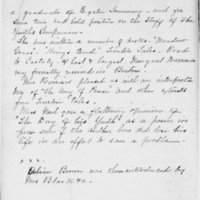