By order of the President, the members of the Book Club were called together on the evening of Oct. 2nd at the home of Mrs. Smith. This goes on record as the earliest date set for a meeting since our club was organized. A testimony to the business like character of our President, Mrs. Grey, and a circumstance which arouses a slight suspicion of our own Pres.’s haste to lay aside the “Robes of office.” We regretted the absence of three members, Mrs. Sloan, Miss Withers and Miss Thompson. A majority being present we proceed with the regular business, incidental to the opening of each new series of meetings. The election

[Page 2] of officers was rendered more than usually exciting because of the nominations of three ladies for Pres., each member clinging to her choice with the tenacity of a veteran politician. Much wire pulling and lobbying was in order. The first ballot showed Mrs. Sloan and Miss Thompson Tied for the Presidency, Mrs. Black a close third, and Mrs. Martin elected Sec. & Tres. More whispered consultation and another ballot gave us Miss Thompson as President and Mrs. Sloan as Vice P. Mrs. Black having ignominiously pleaded everything in order to be excused from office. The lists of books seemed to have been made up with an unusual amount of care and interest. After a thorough study of the
[Page 3] list collectively and individually, in which we were much aided by Mrs. Frank Osborne of Charlotte, guest of Mrs Graham. Twelve books were selected. The meeting was adjourned to be continued when the books should arrive. [ ] Oct.-Mrs. Grey assembled the club in her parlor to “cast lots” for the inviting new books displayed. In seriousness or gladness the members carried home the books as follows (List on opposite page) [no list provided] In gathering together as a club we mutually sorrow for the loss of our bright and lovely young member, Miss Alice Neel, so recently taken to the mansion above. Tthe loveliness of her person
[Page 4] the stimulus of her bright mind,the purity and beauty of her character is a loss keenly felt by us as a Club and as individuals. The Club offers as hearty vote of thanks to the retiring officers Mrs. Grey, Mrs. Black and Mrs. Dupuy, for a most harmonious and pleasant series of meetings. The newly elected officers ask us higher praise than to have it said that they worthily succeed them. 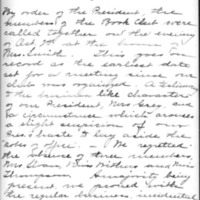 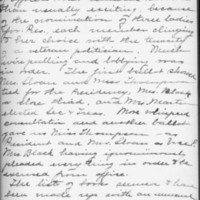 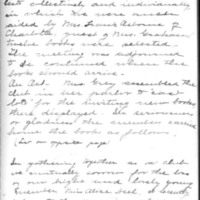 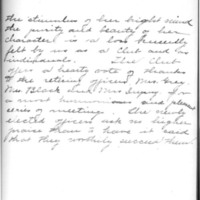