Book club met Oct. 25th at Mrs. Martin’s to elect new officers and also to choose books for the year. By ballot Mrs. Grey was made President- Mrs. Black Vice Pres. - Mrs. Dupuy Sec. First meeting under the new officers Nov. 13 at Mrs. Graham’s was for distribution of the books. There being a division of opinion as to the mode thereof. Mrs. Harrison-Chose- The Ruling Passion by Van Dyke and the other twelve woman-like shirking responsibility, drew by lot as follows Mrs Grey Blennerhasset. Miss Thompson-Heart of the Ancient Wood Miss Holt-Richard-Yea & Nay. Miss Withers-Sir Richard Calmandy Mrs. Martin-Lowell and His friends. Mrs. Black-The Day of his Youth. Miss. Neel-Wind and Wave. Miss Currie- Napolean. Mrs. Sloan-Tribulations of a Princess. Mrs. Dupuy-Some Women I have Known. Mrs. Smith – Truth Dexter Mrs.Graham-House of de Mailly On a motion from Mrs. Martin that two members be appointed at each meeting to report on current events. Mrs. Grey the Pres. chose Mrs. Harrison for Foreign and Miss. Holt for Domestic. though Mrs. Harrison thought her items would be unavoidably

domestic. Emphasis was given to the fact that items must be reported not read. A resolution of appreciation for the retiring Pres- dent was proposed and carried which seemed rather superfluous. Since by the club it stands confessed that what she does is always best. After graceful deference on the part of the members to the stupidity of the new sec. Club adjourned to its first regular meeting Nov. 22 at the house of Mrs. Grey. 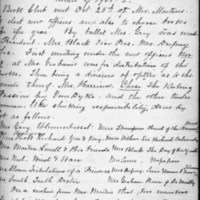 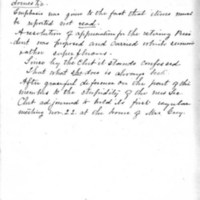