Club met Nov. 22nd with Mrs. Grey. Every member was present. Mrs. Martin reported an improvement in the morals of the Stage as noticed by good judges. Ernest Seton has dropped the Thompson from his name, added he says for a reason no longer operating. White tents will be substituted by some color less conspicuous. We don’t know what the poets will do about it. Carnegie says he has two hundred and eighty millions still for beneficence.Query - How many more secretaries will be need after this statement. The late Lt. Henry Chang was to China what Gladstone was to England & Bismark to Germany. The Pan American Council meeting in Mexico is said to be a great success. Clapp is waiting for the “Atlantic Monthly” on the drama-having recently made a hit with one of his own. Mary Johnson’s Serial is having a noticeable affect on the subscription list of the same. Mrs. Harrison showed the original Duchess of Marlboro in the Gainesboro hat

After considerable discussion it was decided to exchange Richard Yeah & Nay for some other book. This club revenged itself for changing its mind by declaring that the next should never do it. What was left of the hour was then given to Mrs Grey for the discussion of the book, Blennerhasset. One of the members gave a biased opinion of Aaron Burr- brilliant accomplished fascinating magnetic and unprincipled. Mrs. Smith told of Mrs. Theodosia Alston his only child sweet and lovely in character highly cultivated and beautiful. The mystery of her fate will always lend interested to her story. The book Blennerhasset undertakes to justify some of the actions of Aaron Burr hitherto considered [unpardo] blameworthy. Sec. thought she had committed the unpardonable sin of omitting Mrs. Harrisons name from the Club roll but found instead that she had recorded it first. 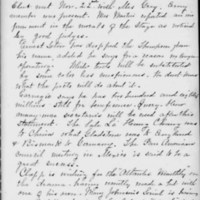 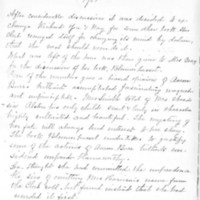