Club gathered Dec. 6th in Mrs. Harrison’s new parlor, so handsomely furnished with pretty old things. All members present except one. The budget of items was full and interesting including the Isthmian Canal Hay-Pauncefort Treaty. Ship Subsidy- reciprocity and other home interests. Besides Trans-Siberian R.R. Archeaology was of special interest. Late discoveries showing hat we have only made ___ scratches on the surface of the subject. The fount [?]of Romulus has been unearthed in Rome and at home a canal in Arizona evidences a civilization three thousand years before the Cliff Dwellers. The Ruling Passion by Van Dyke - subject for The evening was then introduced by the host and through personal friendship which the author copiously illuminated with interesting photos of the whole family. Henry Vandyke born in 1852 son of a minister-a fair blond, wealthy, highly educated & gifted in art, music, and poetry. With a voice so effective as to give to all he says of grave or gay a music all its own. It was a surprize to many that a name so long and widely known belonged to a man only forty nine years old.

Highly blessed in his domestic relations - his wife is his shield against home enemies. He stood unscathed the trying ordeal of being pastor of the Brick Church in N.Y. city and is now Prof. Literature in his Alma Mater – Princeton Univ. Miss Neel gave a vivacious review of his study of Tennyson which was quite _____ Author of many books his “ Little Rivers” introduced a side talk from Mrs. Graham on Isaac Walton’s “ Complete Angler” written three hundred years ago and still the best authority on the subject. On account of the lateness of the hour Miss Holt had to keep her preparation bottled for another occasion. For the same reason, time limit, it was decided to hear reports on Fr.& Dom. Current events alternately & not both the same eve. Club adjourned and meet with Miss Holt on Dec. 20th. 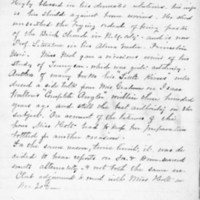