One of the coldest evenings in December the ladies drew up around the heater in Mrs. Holt’s parlor rejoicing in its warmth. There were only ten members present and one visitor. Mrs. Grey reported a new novel by C.W Chestnutt the mulatto author, title “The Mirror of Tradition.” Mrs. Black recalled him as a trimmer of hedges in her home near his, before he rose to fame. He now lives in N. York. A Frenchman has invented the spectrograph which mirrors the speaker at the telephone. Attention was called to some papers on Stonewall Jackson by Dr. Graham Sr. now coming out in “Things & Thoughts” a Wincheste, Va magazine as of special interest . Mr. Wm. Archer chronicling thirty three living English and Amer. poets mentions our Alice Brown. Ian McLauren’s Young Barbarians is said to be very popular. A young Eng. Boy descended on one side from Lord Byron and on the other from Bulwer & Owen Meredith ought to be one of The poeta nascitus.

A French school is to be established in U. States for teaching French students American methods. Miss Holt’s book not having came- she begged to defer naming the subject till the close of the meeting. Miss Thompson then told of what woman had done in the world of music. Chamounard, French, is pronounced by Perry the greatest female composer living or dead. He heard her give a pleasing three hours recital of vocal and instrumental music all her own, without any assistance, playing her own accompaniments, and without a written note. Mrs. H.H. Beach of Boston at one year of age could hum forty tunes, learned the piano keys at two, could read notes at four- and at sixteen played in the Boston Orchestra. Her specialty is dainty songs. The best pianists in Amer. are said to be women. Musical histories are few. Musical words pore[?] Miss Holt read a pen protrait by J.N. Page of the Southern Matrons fifty years ago _______ guide of

a domestic world all her own. Miss Withers was too unwell to bring the heroine of a century back, always “bathed in tears” or “ swooning with emotion.” Mrs. Graham gave us the new heroine, self reliant and energetic. Everyone enjoyed the hot coffee with the dainty accessories - and the cute little sticks of candy fresh from the Memphis factory caused an epidemic of kleptomania - and many mothers went off laden with a couple of them for wee ones at home. The Pres. thought it a bad precedent but was over-ruled. 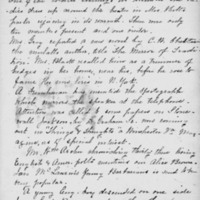 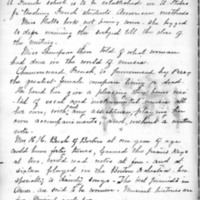