Club met Jan. 3rd with Mrs. Dupuy. She having exchanged evenings with Mrs. Martin by request. At the Charleston Exposition products of home silk manufacture are on exhibition woven before the Revolutionary War. Also some copies of the Columbia Register printed on silk. _____ of the present date showed small progresss in the silk industry. Vanderbilt bringing over from England a music teacher for his home in N.C.had to smuggle him in under a false name, as a cover, from a band resolved to intercept the “importer laborer” James Ephraim McGirt is added to the list of colored poets. Congress has appropriated one million of dollars for the Soldiers Home in Johnson City, Tenn. for both Union & Confederate soldiers. Thirty five buildings have been erected. Experimenters in Mich. Univ. have discovered a new specific against typhoid fever, dysentery and all intestinal diseases. B_______, by name, is to be used as vaccination

Our Pres. Duke is buying cigarette factories in Germany and Russia – the mores the pity. The coronation of Edward the seventh has been fixed for the twenty sixth of June. The Siberian R.R. just completed was first proposed ten years ago. It has thirty-nine miles of bridges and is a stride in the march of civilization for Russia. A couple of weeks from St. Petersburg will land The Czar on the utmost bonds of his dominion. This clinches the Russian grip on Manchuria. Emigration from Russia to Siberia is large and steady. The book for the evening was “ Some Women I Have Known” by Maartin Maastens-a Dutch author educated in Switzerland & Germany, so proficient in English that he writes it as fluently as his mother tongue. He is a strong satyrist of human weakness, sometimes cynical, and his characters are finely drawn with a few strokes showing a master hand. Miss Withers read flattering notices from a number of American Papers. His books are popular. 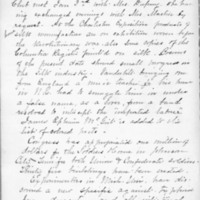