Club met Jan. 17th with Miss Neel. We were glad to see some who had been on the sick list. Items reported were varied and interesting. At the late bicentennial celebration at Yale, of eight honorary degrees conferred, five were on Southerners. Senate Clark of Montana has paid two hundred and fifty thousand for a German Art Collection. Consideration of the purchase of the Panama Canal from the French at forty millions, is by some considered only a bluff diverting attention from the Nicaraguan route, which when completed will cause a decline in the value of overland Rail Road stock. In regard to “Wind and Wave” the book for discussion Miss Neel could find little about the author (Mr.) Burch. Two things however gave her satisfaction: he was neither a woman, nor an American. The Scene of the Story Leyden is beautiful for situations and construction. The Rhine there being drawn out into

a hundred and fifty canals for thoroughfares of the city. She then compared twos most interesting persons connected with that famous siege. Phillip Second of Spain and William of Orange. Miss M.M. Dupuy gave a satyre on modern book-making. Miss Neel a parody on Ernest Seton Thompson’s animal stories - both very amusing* Club adjourned to meet with Mrs. Thompson Jan. 31st *after failing to answer a dozen literary conundrums made by some wag, for the express use of our cute little hostess. 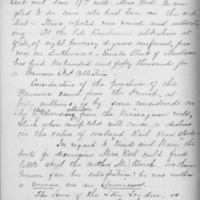 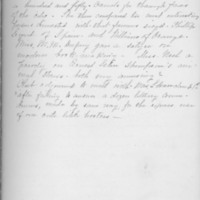