Jan. 31st, the Secretary, arriving late, found the ladies already seated around Mrs. Sloan’s pleasant sitting room. As a substitute for our only absent member, the President brought Miss Daniel a welcome visitor. In response to roll call Mrs. Grey gave some of the eccentricities of authors- Victor Hugo is reported to compose while walking, a modern Peripatetic . Mrs. Black gave a review of “Richard Yea and Nay” by Wm. Moody who considers the imagination of the author suggestive of Shakespears tho lacking in art sense and human touch. Miss Whithers on current events noted two changes in the Cabinet. Shaw as Treasurer and Payne as new Post Master General. Danish West Indies bought by the U.S. lately for five millions of dollars has a valuable port St. Lucian used as a coaling station by the increased number of trading and other vessels plying between the United States and the far East. Attention was called to Uncle Sam’s care in his money-making: each bill being counted sixty three

[Page 2] times before getting into circulation. “The Tribulations of a Princess” was then taken up. Mrs. Sloan gave an interesting account of Brittany, the scene of most of the book and home of the author. Once an independent duchy and united to France by the marriage of Charles eighth to the daughter of the last duke in the fifteenth century. Miss Holt gave some of the sixteenth century legends and local customs especially the celebration of St. Sylvesters Eve, Miss Thompson told of the effect of the Franco- Prusssian war on the simple sturdy folk. Mrs. Smith drew a comparison between the two books by the same author owned by the Club. It was in favor of “The Martyrdom of an Empress.” After dainty refreshments the ladies adjourned to meet with Mrs. Smith Feb. 13th. 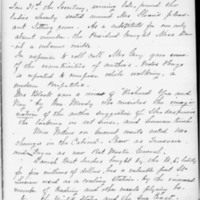 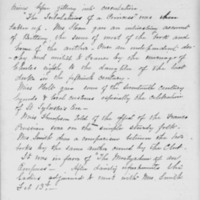