Sickness and bad weather caused the omission of the meeting with Mrs. Smith February fourteenth. Nine ladies gathered with Miss Thompson February twenty eighth - four being detained at home by unavoidable circumstances. Mrs. Gray reported that the Edinburgh Review founded by Sidney Smith and Frances Jeffrey would celebrate its hundredth anniversary in April. Sousa the march man, has written a book: title “The Fifth String.” Of fifty thousand newspapers published in the world, twenty-nine thousand are by the English speaking races. Wireless telephony it is said will follow wireless telegraphy. “Heart of the Ancient Wood” was then taken up. The author Charles Roberts professor of English and French in King’s College Nova Scotia was born Jan. 10th 1860 in New Brunswick. Son of an Episcopal rector he has won two gold medals and written books on history, fiction and poetry

[Page 2] and is fond of football and tennis. He kindly wrote very fully in reply to Miss Thompson’s letter of inquiry- but omitted one item of interest. Is he a bachelor? After a month of snow, sleet and ice all relished particularly fresh fruit from the tropics. The next meeting will be with Miss Withers 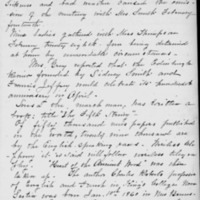 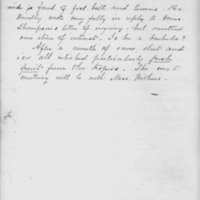