The death of an honored member of our community (Mrs. Shearer) caused a postponement of our meeting from Friday 16th to Monday 19th. The members with exception of Mrs. Dupuy assembled in Mrs. Grahams parlor, whose privilege it was to enlighten the club concerning “Maeterlinck,” the author of the Life of the Bee. To the large majority of the Club he was a utterly unknown quantity. The first price of information Mrs. Graham gave was that Maurice Maeterlinck is a young man 35. The only thing we thought we knew was the he would prove a hoary headed philosopher in appearance, an athletic, fresh-country gentleman, quite approachable in manner. A Belgian with a commodious, comfortable

[Page 2] house in Oostacher and a winter residence near Paris. A lover of nature, and abhors routine. A native of Belgium, the little kingdom which has, in it many vissitudes been under the scepter of Rulers from so many countries and whose population is of French and various races. It is not surprising, to learn that Maeterlinck has the peculiarity of many countries. Mrs. Harrison interested us deeply in a discussion of his style and works. Maeterlinck bears decidedly the mark of the German school in his love of the mytic and his agnosticism. The coarsness which surprises us, in his works is accounted for as a product of old world civilization, so hard for us to understand. As a Dramatist he is not understood in our country. Fate and Destiny are the Ruling elements in his plays. He is called the Belgium Shakespeare but his philosophy, Fatalism, is in striking contrast to Shakespeare, with whom
[Page 3] Destiny is character. Maeterlincks works are passing but Shakespeare’s are written for all time. His idea primarily is to deal in mysticism and for reasons of this he is compared to Wagner. He tells us that where lost in pessimism Emerson lead him to the light. He is now in his prime and we will probably be much enlightened or confounded by more from his pen. Mrs. Grey gave us Current events. The Secretary has recorded a resolve not to say anything more in praise of the collection of current events for fear of mental aberration in trying to find fresh encomiums for each one and not to put more laurels in one wreath than the one preceding it. Mrs. Dubose of Soochow China was the guest of honor. The club adjourned much enlightened to meet with Mrs. Grey- Jan. 30th 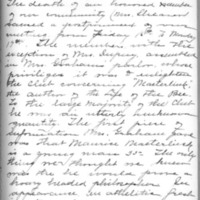 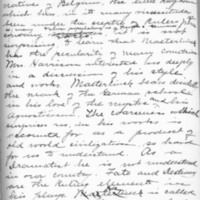 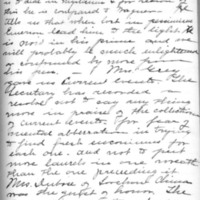