At no meeting in this series have all the members been present-the roll shows one absent each time and not more than two absent from any meeting. Mrs. Black was the absentee Jan. 30th when we met with Mrs. Grey. As the items were called for it because evident that the death of Julian Ralph of the N.Y. Sun was considered the most important event of the day. He is worthily notable for his brilliant reports of the African war. It is thought that his death is a result of exposure and fatigue necessary of the service he rendered. Another interesting fact was the proposed use of peat as fuel in the U.S. Large quantities are found in Indiana and can be

[Page 2] converted into fuel at comparatively small expenses. Chas. Major being the author of the evening, Mrs. Grey undertook to protect him through discussions of the members. Miss Holt told us that he is son of a judge, his home is in Indiana. Reared in an atmosphere of books and of culture, he early developed literary tastes, more especially a love of history, and now collectors have a standing order for any rare volume they can procure for him. Mr. Major styles himself on historical novelist, as opposed to historical romance. Authorities say that a Novel is scientifically definable as a domestic history in which the whole interest & all the facts are made to combine in the evolution of a tale of love. A Romance is distinguished from this in that it does not bind its self to reality
[Page 3] but gives scope to imagination and idealization. By using historical facts and settlings Mr. Major claims the title of a Novel for Dorothy Vernon. It is interesting to know that the places described really exist, in the most beautiful and interesting part of England. Haddon Hall is still standing. There was really a girl called Dorothy Vernon, peace to her ashes, we hope it is not granted to her to know herself so depicted as Mr. Major has portrayed her. However, the book is by the majority voted a pleasant pastime for half hour or more. –And the illustrations by Christie are beautiful. There was no business before the meeting, and after much pleasant discussion of the books the club was adjourned to meet with Mrs. Currie Feb. 13th. 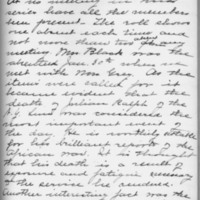 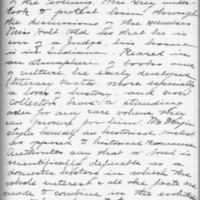 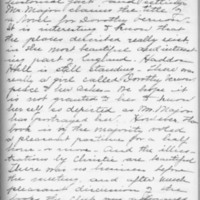