By special arrangement the meeting was with Mrs. Currie instead of Mrs. Harrison as our list shows, As the Secretary had prepared a boastful paragraph in the minutes regarding the regular and full attendance on all the meetings of this series - this meeting was opened with five members absent. After hope had left the few assembled, Mrs. Black and Mrs. Graham arrived, and as a pleasant aftermath Mrs. Smith was announced. So after all, the year’s record is unbroken yet, and we had only two members absent Mrs. Grey and Mrs. Sloan. It was Mrs. Currie’s lot to enlighten us on the subject of Mrs. Edith Wharton and her book the Valley of Decision. Mrs. Wharton is a thorough going New Yorker of Revolutionary Stock and

[Page 2] distinguished ancestry. Her education was gained at home independent of schools & colleges much of it being absorbed in Europe. She married a Bostonian and fortunately her aim can be purely literary and not commercial. Previous to this she has published one novel and 2 vols. short stories. This last work, the Valley of Decision, is said to stand out giant like among its surrounding. The scene of the story is laid in Italy in the latter part of the 18th century and is a discussion of the politics, art and religion of that time. Though a good American, Italy is the country with which Mrs.Wharton is most in sympathy-She is a reverent student of art as well as of letters. This book places her at once among the foremost novelists of the days, and she is unanimously compared to Henry James. Her style resembles his (says the Lounger) as pictures of the same school resemble each other
[Page 3] but the likeness in her case is never imitation. She has a “stern duration to style, much worldly wisdom, wit and fancy which combined with her good taste promises a brilliant future. Mrs. Graham discovered for us that the title of the book is taken from the bible, as is the case with so many recent novels. In Joel we find- “Multitudes, multitudes in the valley of decision, for the day of the Lord is near, in the valley of decision.” To one who has read the book, the aptness of the choice of title is apparent. Further, Mrs. Currie asked Mrs. Dupuy to read a poem by Edith Wharton, to see if she couldn’t put sense into it by her rendition of it. The poem was entitled “Uses,“ and though Mrs. Dupuy did her proudest, the members are not prepared to say what
[Page 4] its uses are. Because Mrs. Martin was brought up among S. Carolina dialect darkies-Mrs. Currie complimented her by asking her to read a poem on the Apple Tree by Joel Chandler Harris. Evidently this poem could not be spoiled by its rendition and the members enjoyed the humor of Mr. Harris with hearty laughter. Added to this, Mrs. Currie’s refreshments, suited to the taste of the most fastidious, brought to a close a thoroughly enjoyable afternoon. 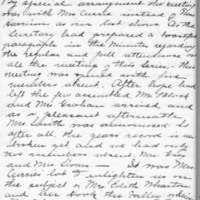 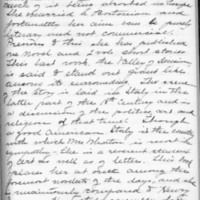 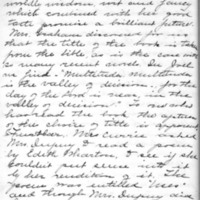 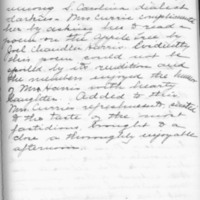