For the second time in this series, a deluging and persistent rain prevented the assembly of the club members in the date appointed. The disappointment on Friday made keener the pleasure of meeting with Miss Julia Holt on Saturday the 28th. – For the first time this year, all the members were present. After hearing a pleasant round of items the President put the meeting in the hands of Miss Holt, who announced Frank Norris and his hook the Octopus, as the subject of the evening. Mrs. Graham first gave an outline if Frank Norris’s brief career. Born in Chicago, at an early age he moved to San

[Page 2] Francisco Cal. where he received his education at the High School & Unversity of Cal. Later going to Harvard, and after graduation there studying Art in Paris. He returned to this country to take up Journalism & later the more serious work of making books. His early death is much lamented, as he was well beloved by his contemporaries. It was Mr. Norris’s purpose, Miss Holt told us, to write three books, spoken of as a “Trilogy,” on the subject of Wheat, as the point around which American life centers. The first work, The Octopus has its scene laid in Cal. & is a description of the fight between the Wheat Growers and the great R.R. Trust. Next in order is The Pit-the scene of which is the Stock exchange in N.Y. The last, The Wolf, was to depict the Consumers, the scene being
[Page 3] laid in Paris. While engaged on this work Frank Norris was called Higher. Miss Thompson read a tribute from Owen Wister and Mrs. Harrison gave Mr. Dean Howell’s estimate of Norris. He calls him an apostle of Realism, a man who felt he had a work to do and a confidence that he could do it. He was aroused to our need of a distinctive- a continental literature, and it is to be hoped that some one else will feel called to take up the work he has had to lay down. Miss Whithers spoke of The Octopus as a strong, clear novel which touches all classes and leaves a vivid picture of the condition of the Wheat Growers and their fight with the mighty R.R. Trust. Much discussion of the Octopus and books in general followed. Miss Emma Phifer was the guest of the evening. The club adjourned with thanks to Miss Holt for much enlightenment and pleasure. 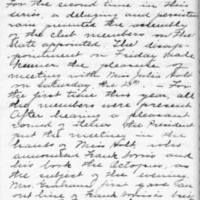 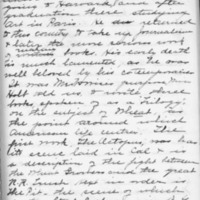 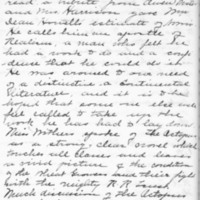